Arnaud Soubeyran, all tradition was once novelty

If the confectionery origins are lost in the mists of time...

for the Arnaud Soubeyran House it started in 1837 by the marriage between Mr. Arnaud, confectioner, and Miss Soubeyran. This audacious couple was one of the first to launch nougat production on a scale exceeding the one of the pastry chef, getting the position of a premium confectionery thanks to the raw materials lovingly selected in the region. Without any direct descendants, Mrs. Soubeyran, who maintained the shop and the manufacturing until 91 years age, left the business to her son-in-law, Jean Abel Pinchard.

The Ace of the master cooks

Following several successions and one takeover, it was thanks to Alfred Cru, nicknamed “the Ace of the master cooks”, that Arnaud Soubeyran came back to the golden age. It must be said that he always saw things on a large scale, evidenced by the Yacht made with 26kg of Nougat that he offered to Grace Kelly in 1956. He made two exclusive recipes, a soft and a hard nougat, with special cooking methods that no one has been able to imitate.

In 1977, after several difficult years and an unsuccessful merger attempt, the brand was forced to declare bankruptcy. Three years later, during the auction, Charles Brotte, who was born in Montélimard, bought it… a dream of childhood… He reinstated the famous Mr Cru’s recipes, as well as the cooking methods in copper cauldrons, that are still in use today.

In 2000, for the third consecutive generation...

Caroline, granddaughter of Charles, and her husband, Didier Honnoré, took over the management of Arnaud Soubeyran House. They founded 5 years later the Nougat museum which now receives more than 60,000 visitors per year. Caroline developed the new extension which includes the shop, the museum and the restaurant / tea room, a lively place that hosts exhibitions throughout the year and brings artists and gourmands together around their passion for good things. Didier was introduced to the art of cooking nougat with Christian Gil, master cooker of the factory since the 80s. They created together the variations of the range “discovery”, unique and exclusive recipes with fig, toffee and more recently with coffee!

In 2008, the Arnaud Soubeyran family expanded with the purchase of the Atelier Des Douceurs and its delicious old-fashioned toffees and marshmallows, and in 2014, with the creation of the Saint Honnoré biscuit factory, as a fervent defender of the butter biscuit of yesteryear. 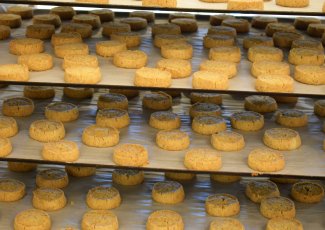 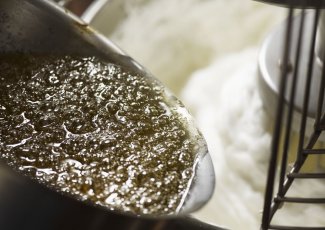